We have been very blessed to be able to have children. My first pregnancy was a little bit of a rollercoaster. In the first trimester we thought we lost Jayden and when it came time to deliver, an emergency c-section was needed. Jayden became my first miracle baby.

My second pregnancy, sadly ended in miscarriage. I don’t know exactly how far along I was, but I can tell you that it was a very heartbreaking experience. It is not easy to talk about still and I have found many women struggle to talk about losing a baby. I am so thankful to know that the little one I never met is in the arms of my wonderful God! 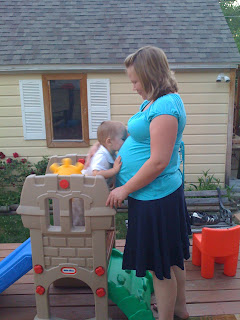 When I became pregnant with Jimmy just a few months after the miscarriage; it was discovered that I had been “sensitized”. My first thought was, “What does that mean?” So, the research began.

Negative blood sees positive blood as a “cancer type” threat and develops anti-bodies to kill and destroy all positive blood cells. Basically this means, when pregnant, my body attacks the baby attempting to destroy the very blood that makes us able to live. The antibodies in my blood will break down the babies blood until the baby becomes anemic. If the anemia is untreated, the baby’s organs will slowly stop functioning and the end result is a still born baby.

There are several types of anti-bodies. I started out with Anti-D and Anti-C. But towards the end of my pregnancy with Jimmy I had developed Anti-E and Anti-F as well.

Ok. So you are probably wondering as I was, what in the world do you do about all of this?!

The typical management of sensitized pregnancies is as follows:

First Trimester:
Monitor antibodies by mother’s blood work. Antibodies are measured as titres. Anything above a 32 is considered to be critical.

Second & Third Trimester:
Once critical level is seen in mother’s blood beginning at 18 weeks, ultrasounds are performed to measure whether the baby is becoming anemic.

During the ultrasound the Middle Cerebral Artery (MCA doppler) is focused on. This is the main artery at the top of the middle of the babies head. The ultrasound measures how fast the blood is flowing to gage signs of anemia. Several readings are taken and an average measurement is determined. There is a chart used to determine if the readings were average flow or anemic flow.

If the ultrasound shows signs of anemia in the baby, the next step is Intrauterine Blood Transfusion (IUT). This procedure gives the baby a blood transfusion while in the womb giving them much needed red blood cells. The IUT is done in labor and delivery at the hospital and done while mom is awake using an ultrasound to find the umbilical chord and amniocenteses type needles to administer the transfusion. (Jon calls them horse needles)

Jimmy received two IUTs. The first at 28 1/2 weeks and the second ten days later. He needed a third IUT but I was in labor and my doctors determined the best step was to deliver at 32 weeks. He stayed 2 weeks in the NICU and received 5 more blood transfusions before he was 3 months old. 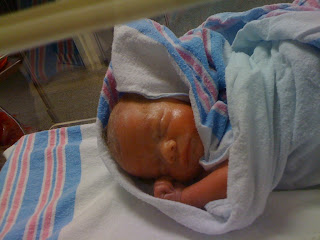 Jimmy about to receive a blood transfusion in the NICU
(where did this tiny baby go?) 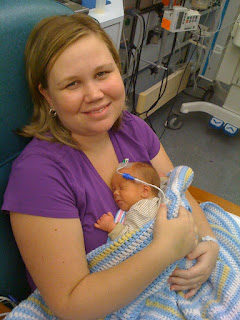 So, here is the scoop on this pregnancy so far. I started the pregnancy with Anti-D, C, and E. Anti- D and C were both way above the critical level at eight weeks. They have both doubled since then. This week we will be scheduling our first ultrasound to begin measuring the MCA level for this baby.

I hope I haven’t confused you or bored you. But I wanted to have a reference post for those asking about  what this pregnancies risks were.

We know that the Lord is in control. Jon and I have perfect peace and have been blessed with some really awesome doctors! Last ultrasound at 15 weeks showed a healthy baby in every way they could see. (Praise the Lord!) It is a little easier this time around, knowing a little of what to expect. I will keep you all updated here as often as possible. Thanks for all the prayers and support!

This site uses Akismet to reduce spam. Learn how your comment data is processed.

Hi I'm Keikilani. I have 6,000 children...Ok maybe 6, but it feels like I cook for 6,000! Welcome to my blog where I share about the Big Family life, parenting tips, household hacks, kid stuff, and the crazy motherhood journey. Meet my family...
Food Advertising by

Checklist, resources, & quotes for those thinking about Foster Care & Adoption

*By entering your email you agree to be on our subscriber list. You may opt out at any time.

Thank you for taking the first steps to being a Foster Parent & Adopting.

DOWNLOAD your FREE Resource Packet by clicking this link: https://allmygoodthings.com/Fo...

This website uses cookies to improve your experience while you navigate through the website. Out of these, the cookies that are categorized as necessary are stored on your browser as they are essential for the working of basic functionalities of the website. We also use third-party cookies that help us analyze and understand how you use this website. These cookies will be stored in your browser only with your consent. You also have the option to opt-out of these cookies. But opting out of some of these cookies may affect your browsing experience.
Necessary Always Enabled
Necessary cookies are absolutely essential for the website to function properly. This category only includes cookies that ensures basic functionalities and security features of the website. These cookies do not store any personal information.
Non-necessary
Any cookies that may not be particularly necessary for the website to function and is used specifically to collect user personal data via analytics, ads, other embedded contents are termed as non-necessary cookies. It is mandatory to procure user consent prior to running these cookies on your website.
SAVE & ACCEPT
Follow my blog with Bloglovin google7e8916a4290655aa.htm